*a portion of the proceeds will go to the USS Hornet 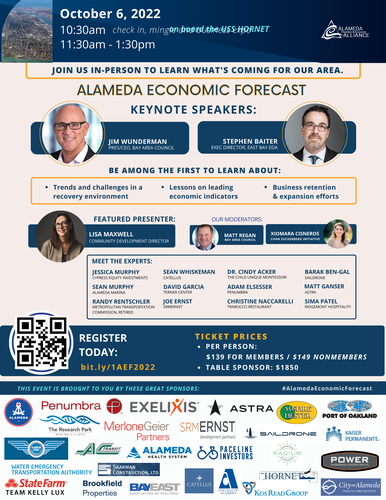 Be among the first to hear from local leaders on the Economic Outlook for the coming year. You'll learn what leading indicators are telling us as well as internal and external forces that could accelerate or slow down our growth. This information is critical to your upcoming plan and business goals. You don't want to miss it.

Lisa Maxwell has served as the Community Development Director (CDD) since December 2020, where she oversees a wide range of City projects and initiatives, including the redevelopment of Alameda Point, management of City owned real estate assets, economic development, affordable housing, City social services and public art. Prior to her appointment as the CDD director, she served as an Assistant City Attorney for Alameda specializing in real estate and contract matters. Ms. Maxwell has over 25 years of experience in real estate. She is a graduate of James Madison University in Virginia and has a law degree from Santa Clara University.

Panelists:
Xiomara Cisneros was appointed to the City of Alameda's Planning Board in October 2020. She is also manager of the housing affordability team for the Chan Zuckerberg Initiative, CZI, where she works with grantees and partners to build an equitable and affordable housing system so everyone can have a safe, stable place to call home. Prior to joining the CZI, she was director of Bay Area Council’s housing policy initiative. Her experience also includes overseeing the public affairs and community engagement program for the Brisbane Baylands and Schlage Lock project. She is a graduate of Lorry I. Lokey School of Business at Mills College, and of University of California Los Angeles. She sits on several boards and committees, including the Housing Action Coalition, San Mateo County’s Housing Leadership Council, ULI’s Housing the Bay Committee and San Francisco’s Community Investment Fund Advisory Board.

David Garcia is the Policy Director for the Terner Center. He leads the center’s engagement in local, state and federal housing policy and supports the generation of research-driven policy ideas, proposals, and papers. David's work and insights have been featured in the New York Times, Wall Street Journal, the Washington Post, the Los Angeles Times, and NPR. Prior to joining the Terner Center, David worked in real estate development in Stockton, California focused exclusively on infill projects in the downtown neighborhood. In this role, David managed various aspects of the development process, including development agreements, environmental review, and project design.

Jessica Murphy is the Vice President of Development at Cypress Equity Investments. Jessica is responsible for delivering multifamily and mixed-use projects in markets across the US. She is part of the Alameda Point Partners team and was the development and construction manager for AERO Apartments at Site A. Jessica joined the real estate development community following a career as a civil engineer, in transportation planning and construction management. She completed her MBA at the UCLA Anderson School of Management where she graduated with honors and a specialization in real estate. Jessica received her Bachelor’s degree in Civil Engineering from the University of British Columbia in Vancouver. Jessica is a member of the Urban Land Institute (ULI) and the UCLA Real Estate Alumni Group (REAG).

Sean Murphy (Alameda Marina)
Pacific Development is the real estate acquisition and development affiliate of Bay West Group. He is a partner with Pacific Development and joined Bay West in 2003. Since then, he has been responsible for the entitlement and development management of over 3,500 residential units in California and Nevada. Previously, he co-led the development group for Santa Fe Partners, which was a full-service real estate development company. At Santa Fe, he was responsible for the acquisition, entitlement, development, and construction management of several residential urban in-fill projects in San Francisco. Trained as an architect, Sean was a Senior Project Manager and Lead Architect for Skidmore Owings & Merrill in San Francisco. Sean’s educational background includes Graduate studies of Business and Architecture at the University of California at Berkeley and a Bachelor of Science in Architecture from The Ohio State University. He is a member of the AlA and of ULI.

Randy Rentschler (retired Metropolitan Transportation Commission) served as Director of Legislation and Public Affairs and other roles for the San Francisco Bay Area’s Metropolitan Transportation Commission, the Bay Area Toll Authority and the Association of Bay Area Governments for over 30 years.  Each organization is recognized as national leaders. Randy’s role included passing legislation, managing public outreach, news media and all other communications. Before joining MTC, Randy worked as an investment banker, structuring local government debt. He also is an Adjunct at UC Berkeley teaching public policy and communications.

Sean Whiskeman (Catellus)
Senior Vice President – Development of Catellus Development Corporation, is responsible for all leasing, marketing and development activities for Catellus’ retail portfolio of shopping centers and development projects throughout the Pacific Region, including the Bay Area, southern California as well as Arizona. Mr. Whiskeman is an active member of International Council of Shopping Centers and the Urban Land Institute. He is also active in his community as a Board Member of both the Fremont Chamber of Commerce and the Alameda Boys & Girls Club. Mr. Whiskeman began his Catellus tenure in 2000 and was responsible for entitlements, leasing, design, contract negotiation and development for three Catellus projects. He has also served as the Managing Director of Leasing and Marketing of Westrust Ventures, a leading shopping center developer. Mr. Whiskeman holds a Bachelor of Science degree in regional development from the University of Arizona

Panelists: Dr. Cindy Acker (The Child Unique Montessori) is the founder of The Child Unique and The Montessori Elementary Intermediate School of Alameda (MEISA) and has served as principal for over 30 years. She has several degrees in education, human development, spirituality, cultural studies, and a doctorate in Educational Leadership from UC Berkeley. Cindy has also been involved in public policy, representing Montessori schools in California. She is a published author, playwright, director, and national keynote speaker. Apart from her passion for education, Cindy is a singer and choir director in Novato and a mother of three adult children. Cindy speaks Dutch and Spanish.


Adam Elsesser (Penumbra) co-founded Penumbra and has served as Chief Executive Officer and a member of our board of directors since our inception in 2004, as Chairman of our board of directors since January 2015. He resumed the role of President in May 2020, previously serving as President from January 2015 until August 2019. Prior to Penumbra, Adam led SMART Therapeutics, Inc., a medical device company focused on devices for neuro-intervention, as its Chief Executive Officer from 2000 to 2002 and, after its acquisition by Boston Scientific Corporation, President of SMART Therapeutics within Boston Scientific Corporation from 2002 to 2005. Before his work in the medical device industry, Adam was a partner in the law firm of Shartsis Friese LLP. He received a BA from Stanford University and a JD from Hastings College of the Law.

Joe Ernst (srmERNST) is the Managing Principal and Founder of srmErnst Development Partners, having over 30 years of real estate experience in development, investment, asset management and finance.  Joe joined SRM Associates in 1999, became the principal in charge of all new development in 2005 and Managing Principal in 2012.  Previously, Joe was involved with the structuring of private mortgage and asset-backed securities transactions, developing a conduit for the acquisition and securitization of subprime mortgages, and the acquisition, restructuring and fund management of a $1 billion portfolio of distressed residential loans and underperforming CMBS deals, all while with Cargill Financial, Piper Jaffray and Norwest (now Wells Fargo) in Minneapolis, MN.  Joe has his B.A. in Finance and Computer Science from the University of St. Thomas.

Matt Ganser (Astra) is the VP of Business Operations at Astra based in Alameda, CA, where their mission is to improve life on Earth from space. He leads Spaceport Services, Government Relations, Licensing, and Real Estate Services. Previously Matt was the founding member and Executive VP of Engineering & Technology at Carbon Lighthouse. While there he helped develop the first-ever energy savings as a service for commercial real estate through a patented and award-winning technology. He attended Stanford University with an MS in Civil Engineering and a BS in Mechanical Engineering from The University of Texas at Austin. He’s a dad of three and enjoys biking around the island in his free time.

Christine Naccarelli (Trabocco Restaurant) grew up in Kailua on the island of O’ahu. While her family found their passion in watersports, Christine spent most of her youth in the ballet studio. She left Punahou School to finish her last two years of high school at the Alabama School of Fine Arts where she received world-class ballet training. She serves on the Advisory Board of the Alameda Civic Ballet and performed in their annual Nutcracker production at Kofman Auditorium prior to opening Trabocco.

Sima Patel (Ridgemont Hospitality) is Co-Founder and CEO of Alameda based Ridgemont Hospitality. As a family owned and operated company , Ridgemont hospitality’s portfolio consists of branded and independent boutique hotels. Sima is a  Passionate Leader, Visionary, and lifelong Entrepreneur with extensive experience in Hospitality operations and Hotel Development. Sima is currently serving as a Chief Fiscal Officer and past chair of Visit California representing over 20,000 tourism industry partners. She is currently serving on an executive committee of the California Chamber of Commerce, and the California State University Hospitality and Tourism Alliance Advisory Board. She is a Recipient of numerous business and leadership awards including AAHOA women Hotelier of  Year 2001 and  100 most influential women in business SF Bay Area. 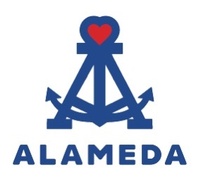 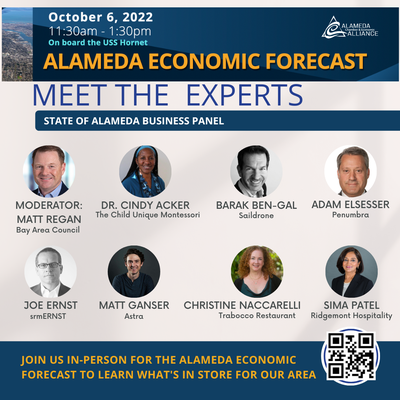